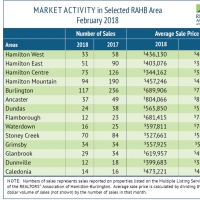 “February’s real estate market experienced a significant slowdown, and that’s compared not just to last year, but to the last 10 to 15 years as well,” said RAHB CEO George O’Neill. “In fact, the number of new listings was the lowest in the last 15 years and the number of sales was the second-lowest in that same 15 year period.” Seasonally adjusted* sales of residential properties were 38.9 per cent lower than the same month last year, with the average sale price down 0.2 per cent for the month. Seasonally adjusted numbers of new listings were 12.6 per cent lower than February of 2017.